Tracking the Largest Turtles on Earth

Tracking the Largest Turtles on Earth 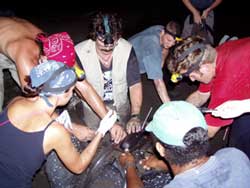 Through a unique partnership with Hubbs-Sea World Research Institute and the University of Central Florida, CCC is participating in a groundbreaking study to track the migrations of the largest turtle on Earth. In June, CCC researchers deployed satellite transmitters on two mammoth leatherback turtles at Tortuguero, Costa Rica, and the incoming data is providing a never-before-seen glimpse at the cross-oceanic movements of leatherbacks from this part of the world. The tracking sudy compliments CCC’s long-standing leatherback monitoring program in Costa Rica, as well as a new project launched this year in Panama.

CCC’s ongoing nesting beach surveys in Tortuguero, combined with aerial surveys along the Caribbean coastline from Nicaragua to Panama, are helping document nesting trends of the endangered leatherback in the Western Caribbean. Preliminary analysis suggests the nesting aggregation along the Caribbean Coast of Central America may be the third or fourth largest worldwide! Unfortunately, very little is known about where these highly pelagic turtles spend their time away from the nesting beach. Better knowledge about migration patterns will help in protecting foraging areas and detecting impacts from commercial fisheries. Also, because Caribbean leatherbacks show less nesting site fidelity than those in the Pacific, it is important to know the various beaches where individual turtles nest. Conservation efforts are more difficult because leatherbacks, unlike green turtles, don’t always return to the same beach to nest. As a result, coordinated monitoring programs and regional conservation strategies are needed. CCC is leading such efforts in the Western Caribbean.

To answer important questions about leatherback behavior, CCC is participating in a project to track the pelagic and inter-nesting movements of Caribbean leatherbacks. In May, CCC research staff worked with Dr. Llew Ehrhart, Dean Bagley and other University of Central Florida researchers to be trained in the process of attaching satellite transmitters to leatherbacks. The UCF crew has been satellite-tagging Florida leatherbacks for several years. The turtles are fitted with a lightweight, weather-resistant backpack that falls off over time or snaps off if the unit ever becomes entangled.

Through a partnership with the Hubbs-Sea World Research Institute, CCC was provided with two harnesses and transmitters to deploy on leatherbacks in Tortuguero. In June, CCC staff, with help from its team of Research Assistants, successfully deployed both transmitters. Data is already streaming in with critical information about the leatherbacks’ previously unknown post-nesting migrations. CCC’s Internet-based Sea Turtle Migration-Tracking Education Program allows anyone with Internet access to follow the movements of the two leatherbacks, named “Chica Tica” and “Flora.” The on-line program teaches people about sea turtles and the threats to their survival by allowing them to “watch” sea turtles as they migrate from the nesting beach to feeding grounds located hundreds or even thousands of miles away.

Leatherbacks were first fitted with satellite transmitters in the early 1990s, when the technology of satellite telemetry was still new to biological applications. It’s been a trial and error process for scientists to develop a reliable method of tracking sea turtles. The process has been especially difficult with the giant, soft-shelled leatherback. Researchers with HSWRI were among the first to develop a harness system that worked. Through the new CCC/HSWRI partnership, leatherbacks from the Caribbean coast of Central America now are being successfully tracked, providing valuable information for scientists, natural resource managers and turtle enthusiasts.

As of September 12, 2003, Chica Tia (View Chica’s Map) was over 1,800 miles from Tortuguero. Initially, she appeared to hug the Costa Rican coastline, possibly returning to nest one more time, before heading into the open water of the Caribbean Sea, between Cuba and Haiti, to the eastern coast of the U.S. Upon her release, Flora (View Flora’s Map) darted quickly across the Caribbean and as of September 12, 2003, has moved out over deep water in the Atlantic Ocean, traveling over 2,000 miles and averaging more than 40 miles per day! Both turtles are still on the move, and CCC and HSWRI hope to track the animals for at least another year.