Throughout the years, STC has received a lot of support from schools, classrooms and individual kids. In an effort to raise funds for sea turtle conservation, many individuals, teachers and students come up with creative fundraising events.

A school classroom from Shirako-machi, Chiba Japan recently contacted STC to share its interest and enthusiasm for protecting loggerhead sea turtles. The North Pacific Ocean is no stranger to loggerhead sea turtles. In fact, all loggerhead nesting in the North Pacific occurs in Japan. But as loggerhead populations are declining around the world these students are doing their part to educate fellow students and protect their local beaches. The students and teachers organized
a beach clean-up, watched educational videos, adopted an endangered sea turtle from STC and shared sea turtle origami instructions with fellow students. STC would like to thank Akihiko Takahashi’s classroom for all their hard work and support!
Download the sea turtle origami instructions

Lauren Schusterman wants to be a marine biologist when she grows up. Part of her fascination for the ocean comes from traveling to the U.S. Virgin Islands with her family where she has watched first hand as hatchlings struggle to make their way safely to the water. It is no surprise that this is where Lauren chose to have her Bat Mitzvah and celebrate her 13th birthday. Instead of gifts Lauren asked her guests to donate to STC. Her guests gave over $1,000 in donations in support of STC and sea turtles! Lauren’s mom, Mary, told us that she is a very down-to-earth vegetarian who loves all animals. Lauren felt that she didn’t need more “stuff” and thought the gifts would be better directed to help conserve sea turtles. STC would like that thank Lauren for her humble suggestion to support STC in lieu of gifts! We hope sea turtles continue to amaze, flourish and inspire a younger generation of marine biologists and sea turtle supporters! Thanks again Lauren!

Our most recent school donation came from a small group of 4th graders from the gifted program at Camdenton Public School in Missouri. One hundred students each chose a charitable cause and gave an oral presentation about their chosen organization. From those 100 presentations the students voted on the top 12 that they felt were the most important and interesting. STC would like to extend a special thank you to Katelyn Bartels whose heart warming presentation about sea turtles moved many students to choose our cause as one of their top 12. Once the students had voted, they worked together planning and organizing a fundraiser for the 12 organizations at their school’s “Philanthropic Phamily Phair.” Seven fourth graders worked on a booth for STC. The group designed a “Turtle Toss” game in which participants tossed bean bags into a sea turtle scene. They also built a Lollipop Tree where participants would purchase lollipops and if they picked the lucky lollipops they would win a large sea turtle replica. Each ticket for the games cost 25 cents. Through their efforts, the students not only raised $125 for STC but also came up with a cumulative total donation of $4,000 for all 12 organizations. After realizing the success and interest of the students, the school is planning on making the “Philanthropic Phair” an annual event. STC would like to thank everyone involved in the event! 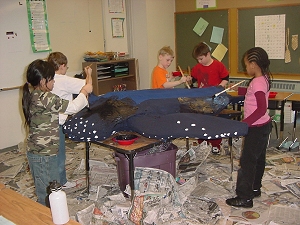 Mr. Lucas Saltzman’s second grade class in Anchorage, Alaska decided that they would like to adopt Zoe, a leatherback being tracked on STC’s website. After adopting Zoe they decided they would like to know more about endangered sea turtles. Each student was given an assignment to go to the library and consult books and also the STC website and write down five facts about sea turtles to share with the class. For an activity they decided to construct a paper mache life size model of Zoe, their adopted turtle. Walnuts were used for eyes and pupils were painted to look real. Then, the class studied sea turtle conservation and their habitats. They decided to create a science fair project about sea turtles and won their school science fair. They also won a ribbon and award at the state fair. Each student used their writing skills to send my wife, Betty, and I an Alaskan post card to thank us for our book and the activities available to them through the STC. The picture is of the students painting their life size paper leatherback. Thank you boys and girls for all your support and for caring about sea turtles!

Payson, Utah, may be over one-thousand-miles from the nearest ocean but that doesn’t keep the students at Wilson Elementary School’s Options Class from caring about sea turtles. When Mr. John McHugh introduced them to sea turtles and their life cycle, the kids were hooked! And when he informed them that sea turtles were endangered, the Options kids wanted to know how they could help. Mr. McHugh mentioned that the class could adopt a sea turtle for one year and do things to help protect them in their battle for survival. As soon as they heard this news, 1st grader Colton Pace and 2nd graders Malachi West, Zach Sandoval, Jarron Remund, and Kenneth Cranney sprung into action. They chose to take the $35 they could have spent on an end-of-year classroom party and used it to join the Sea Turtle Survival League and adopt a sea turtle for one year. After a vote the kids chose to name their Green sea turtle “Pearl.” One thing the Options Class wants to make known to everyone in Utah and everywhere else is this: sea turtles are in danger of extinction and they need our help. They have the right to live on earth just like humans. 2nd grader Malachi West may have put it best when he said, “It’s up to us. The only way that sea turtles like Pearl can continue to live in the world is with our help.” And we couldn’t agree more.