Sea Turtle Conservancy (STC) is hoping all of its supporters will participate in this year’s Giving Tuesday Campaign, which seeks to raise funds for the critical in-water work we are doing studying juvenile green turtles in the Gulf of Mexico. Though not as well-known as Black Friday or Cyber Monday, Giving Tuesday, which occurs the Tuesday after Thanksgiving (December 1 this year), is one day when everyone can join together to make a huge difference.

For Giving Tuesday last year, STC supporters raised $50,000 for STC’s research and conservation programs in Panama. STC has set its sights even higher this year, and we are confident we can reach our goal of $54,000 thanks to generous pledges from STC’s Board of Directors to match up to $27,000 for every dollar donated.

Work on STC’s In-Water Research Project in Florida forged ahead over the last eight months despite unexpected delays and changes in protocols due to the COVID-19 pandemic. The project, led by STC Biologist Rick Herren in collaboration with Dr. Ray Carthy at University of Florida’s (UF) USGS Cooperative Fish and Wildlife Research Unit, recently surpassed 100 green turtle captures in the Big Bend region of Florida. The overall goals are to understand the distribution, health, threats and demographic trends of the sea turtles found in this important foraging habitat and to promote their conservation in the Gulf of Mexico.

With STC’s research vessel (R/V) Lavinia, crewed by a small number of STC staff and UF undergraduate students, the team has been capturing juvenile green sea turtles in a handful of “hotspots” along the Big Bend coastline and studying their movement patterns. Blood samples have been collected from green turtles to determine their sex through hormone analysis and determine their nesting beach origin through genetics. While the results still are coming in, the data provide an important baseline because the sex ratios of turtles found in this area may become skewed toward females as our climate continues to warm. Additionally, the nesting beach origin of juveniles observed along Florida’s Gulf coast might be subject to change as nesting rookeries increase or decrease in abundance. Through turtle captures, we observed that 60% to 70% of the juvenile green turtles in this region show signs of the tumor-causing disease fibropapillomatosis (FP). Through this research, we are documenting important population characteristics of juvenile turtles decades before they are expected to reach maturity and begin nesting. 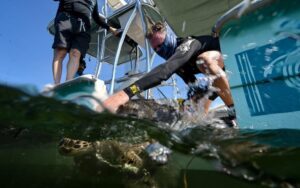 STC is also using satellite telemetry to track the seasonal movements of juvenile green turtles in the Big Bend thanks in part to funding from the Sea Turtle Grants Program (funded by sales of the Florida Sea Turtle License Plate). Last fall, we conducted a pilot study and placed transmitters on six juvenile green turtles at two study sites. Five of the six turtles transmitted locational data into the spring, which provided strong evidence of overwintering behavior. This fall the team is putting out another 17 transmitters, including 10 GPS transmitters, which have a much higher accuracy to better define their home range and overwintering locations. The STC/UF In-water team has been on the water for just over two years now and remains excited about the work we are doing in this important developmental habitat.

STC is deeply appreciative of all the support received from various corporate and private donors for the project. Our current project needs include a dedicated project truck for towing our boat to and from various research sites, which will have the added benefit of allowing STC to respond quickly to turtle stranding events, such as cold stuns. We are hopeful that STC’s members will support the program this Giving Tuesday, when all donations will be matched 1:1 by the STC Board of Directors. With your support, STC will continue filling gaps in our knowledge about the sea turtle populations found in this important region, and we will apply that knowledge to effective conservation action.

Posted in Florida, Get Involved, Research|