Seagrasses are flowering plants found in shallow coastal marine waters and are different than seaweed (algae). Algae obtains its nutrients directly from the water through diffusion, while seagrasses use their leaves and roots to obtain nutrients from sediment and water.

Seagrass beds are important feeding and breeding habitats for many marine species, including sea turtles. Unfortunately, seagrass beds have been on the decline since 1940 and more than one-third of the original seagrass around the state has been lost. Along Florida’s Gulf Coast, seagrass beds have declined 8% since 1969. Seagrasses are both an indicator of environmental health and an important breeding ground for the lower tier of the marine food chain.

Seagrass beds are incredibly important habitat for juvenile and adult fish and crabs and shrimp. They also tend to be relatively sensitive indicators of water quality, and in places where humans are affecting water quality, researchers can look at trends over time in seagrass abundance as a way to indicate whether humans are having more or less of an impact on water quality. In addition to pollution, seagrass beds are declining due to being damaged by boat propellers and anchors. 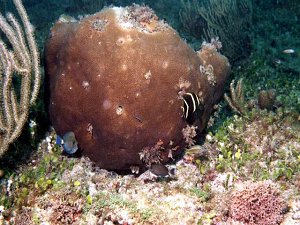 Nearshore hardbottom habitat are the primary natural reef structures at depth of less than 15 feet and is primarily made up of tube-building polychaete worms or coquina shells. Hardbottom reefs are often centrally located between mid-shelf reefs and barrier island estuarine habitats. The reefs provides habitat to more than 530 marine organisms, including juvenile snappers, grunts, groupers, wrasses, and sea turtles. These reefs help stabilize nearby beaches. Nearshore reefs reduce wave and current energy and protect against coastal erosion.

Unfortunately, beach renourishment projects, which involve dredging sand from offshore and pumping it onto the beach, impact nearshore habitats, as well as the green turtles that find food and shelter there. In particular, the artificially wide, man-made beaches bury large sections of nearshore reef and hardbottom habitats used by sea turtles and many other forms of marine life. The projects can also increase turbidity in the water, which affects the reef algae – the primary food source for juvenile green turtles.