The pelagic oceanic zone is the area of open water lying over and beyond the continental shelf, while excluding nearshore and estuary areas. Organisms associated to the pelagic habitat occur in the water column above the seafloor and below the surface and consist of free-swimming creatures also known as nekton and free-floating or less motile plankton. The open ocean habitat sustains a relatively large number of species of fish, marine mammals, marine turtles, and invertebrates, many of commercial importance (i.e., tunas, sharks, sardines, and mackerel). Species use this pelagic environment in a permanent or transitional phase for spawning, breeding, feeding, or growth to maturity.

The upper portion of the epipelagic zone receives sunlight that drives photosynthesis in microscopic floating plants called phytoplankton. Phytoplankton form the base of the complex and diverse open-ocean food web. Upwelling in the spring and summer fuels blooms of phytoplankton, which in turn feed zooplankton and some planktivorous fishes such as anchovies and sardines. Zooplankton such as larvae, copepods, krill and gelatinous organisms are eaten by a wide variety of large, highly mobile animals, including squid, fishes, sea turtles, seabirds and mammals.

Commercial, recreational and other human interests play an important role in the open ocean. Areas that are productive for fisheries also attract marine organisms that are not harvested, such as seabirds, leatherback sea turtles, and whales. Therefore, in some cases conflicts develop between human use and resource protection. Human impacts, such as commercial vessel traffic and marine debris, have the potential to harm or disturb the natural behavior of open-ocean animals. Vessel spills, for example, are a serious potential threat to marine resources. 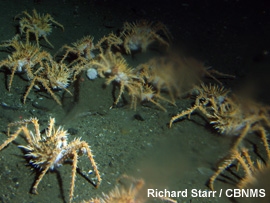 The deep-ocean environment includes depths greater than 200 meters (650 feet) – the approximate depth of the continental shelf break and the beginning of the continental slope. The deep ocean is a dark, cold environment that includes a variety of habitats from the mid-water region to the abyss; these habitats are populated by a wide array of animals that are specially adapted to live under the tremendous water pressure and low oxygen level of this harsh environment. In recent years, improved sampling techniques and technologies have shown that the diversity of deep-sea fauna is greater than once thought.

Conservation and management issues affecting sanctuary resources in the deep sea include marine debris, seabed disturbance and non-sustainable fishing. Anything that is discarded or washed into the sea may eventually end up in the deep sea. Marine debris is a worldwide problem, and deep-sea communities can be negatively impacted by what we do on shore.

Bottom trawling is widely believed to have negative impacts on benthic habitats; these include modification of the substrate, disturbance of soft-bottom communities and removal of non-target fish species. The structure of entire seafloor communities is at risk from repeated disturbance due to this fishing method. Currently we have an incomplete picture about the extent of these impacts in the sanctuary, but the use of trawl gear is an ongoing source of concern.