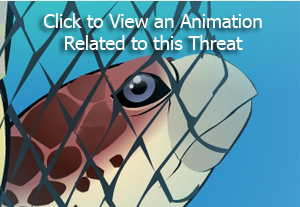 The Problem: Hawksbill sea turtles, recognized for their beautiful gold and brown shells, have been hunted for centuries to create jewelry and other luxury items. As a result, these turtles are now listed as critically endangered. They are especially threatened in the Indian and Pacific oceans and along the Caribbean Coast. According to recent studies, scientists estimate that hawksbill populations have declined by 90 percent during the past 100 years. To improve their survival outlook, an international agreement signed by 173 governments, known as CITES (the Convention on International Trade in Endangered Species of Wild Fauna and Flora), declared the trade of these shells illegal. However, the demand for shells continues today on the black market, especially in Japan. In Japan, the use of bekko (Japanese for hawksbill shell) dates back more than 300 years. Even today, bekko combs remain an important part of the traditional Japanese wedding dress. This cultural importance contributed significantly to the international trade in bekko and resulted in the sharp decline that occurred in the 20th century. Today, lack of information about sea turtles leads many tourists to unwittingly support the international trade in these endangered species. Buying, selling or importing any sea any sea turtle products within the United States, as in many countries around the world, is strictly prohibited by law, but turtle shell jewelry and souvenirs are still the most frequent contraband items seized by customs officials from tourists returning from the Caribbean. While illegal sea turtle trade is primarily based on hawksbills, other sea turtle may be killed for their skin to make leather goods. Beauty products are also be illegal if they contain sea turtle oil.

Species Affected: Hawksbill sea turtles are overwhelmingly affected by this issue. However, green and other species can be traded for their skins.

Case Study: For much of 2002, the Sea Turtle Conservancy (then known as the Caribbean Conservation Corporation) actively opposed a proposal from Cuba and Japan to reopen the international trade of shells taken from critically endangered hawksbill turtles. Specifically, Cuba had proposed a change in regulations under the Convention on International Trade in Endangered Species (CITES) that would allow it to sell and ship several stockpiled tons of the valuable shell to Japan. Under CITES, all international trade in sea turtle products is banned.

In preparation for the CITES conference, STC published and distributed a detailed analysis of the Cuban proposal, including evidence showing that hawksbills killed in Cuban waters migrate from throughout the Caribbean. STC staff also participated in “regional dialogue meetings” in Mexico and the Cayman Islands, where countries from the Wider Caribbean and Latin America met to discuss CITES proposals affecting species in the region. In addition, STC’s scientists traveled throughout Europe to discuss the Cuban proposal with CITES delegates within the influential European Union. By late summer, it appeared that STC and a handful of other international conservation groups were successfully re-building opposition to Cuba’s hawksbill trade proposal. As a final measure, STC and groups such as the International Fund for Animal Welfare, the Species Survival Network, the Humane Society, Ocean Conservancy and others coordinated lobbying efforts for the CITES conference in Chile. Then in August 2002, Cuba unexpectedly withdrew the proposal without giving reason. Whatever the real reason for Cuba’s withdrawal, international cooperation helped draw attention to illegal shell trade and discouraged countries from attempting to re-open this harmful practice.