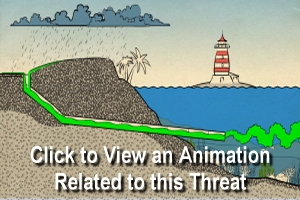 The Problem: Pollution can have serious impacts on both sea turtles and the food they eat. For example, new research suggests that a disease now killing many sea turtles (fibropapillomas) may be linked to pollution in the oceans and in nearshore waters. When pollution contaminates and kills aquatic plant and animal life, it also destroys feeding habitats for sea turtles. Oil spills and urban runoff of chemicals and fertilizers all contribute to water pollution. An estimated 36% of all marine pollution from oil comes through drains and rivers from cities.

Fertilizers are another huge marine pollutant. The runoff comes from farms and lawns, causing eutrophication from the extra nutrients. Eutrophication is an explosion of algal blooms that can deplete the water’s oxygen and suffocate marine life. Eutrophication has created enormous dead zones in many parts of the world, including the Gulf of Mexico. Improper sewage disposal is another factor that causes eutrophication.

Because the ocean is so large, many assume that pollutants will be diluted and dispersed to safe levels, but in reality they create havoc on the oceans’ natural balance. Some toxins even become more concentrated as they break down and enter the food chain. Sea turtles are affected by pollution in more ways than one; they do not have to directly ingest a tar ball, for example, to be affected by it. Small marine animals, on the lower levels in the food chain, like plankton, absorb these chemicals as they feed. The chemicals then accumulate in these animals’ bodies, which makes the toxins much more concentrated than in the surrounding water. These small animals are then consumed by larger animals, like sea turtles, which continues to increase concentration levels of chemicals and pollutants.

Species Affected: All species of sea turtles are affected by marine pollution.

The Solution: Education is important to solving marine pollution. The public can get involved in this issue by:
* Following local codes enforcing fertilizer bans near waterways;
* Using less chemical fertilizers, opting for natural compost instead;
* Buying organically produced food and products;
* Reducing oil consumption by carpooling, using public transportation or buy energy-efficient vehicles;
* Speaking out against off shore drilling;
* Get informed about local waste disposal to ensure that untreated waste water isn’t introduced to natural waterways and oceans.

Case Study: Maritime pollution has subsided somewhat due, in part, to the Federal Water Pollution Control Act of 1972. The law imposed uniform, minimum federal standards for municipal and industrial wastewater treatment and also put limits on pollutants in discharges from industrial facilities. The limits require industrial plants to adopt up-to-date, pollution-control technology. The Clean Water Act also increased standards for waste treatment plants. Between 1972 and 1992, about $125 billion was spent on creating new public treatment works. Bans on pesticides and other harmful chemicals have helped to control maritime pollution. Despite the fact that there has been a steady increase in population and wastewater discharge, maritime pollution has still decreased dramatically. Off of Los Angeles, for example, pollution input as been greatly reduced by 90% or more over the last 25 years. The marine ecosystem there is now recovering.