The small village of Tortuguero (translated as “Region of Turtles”) lies on the northeastern Caribbean coast of Costa Rica, approximately 50 miles north of the principal Port of Limon. the village is comprised of a variety of cultures: Hispanic, Miskito Indian (Nicaragua), and Afro-Caribbean. Both Spanish and Creole English are spoken. The region surrounding Tortuguero is called the Tortuguero Plain, which is a vast low lying area of little topographic relief still covered by a large expanse of tropical rainforest.

Tortuguero beach is the most important nesting site of the endangered green turtle in the Western Hemishpere. Giant leatherback, hawksbill, and loggerhead turtles also nest here. The green turtle population is believed to have come perilously close to extinction in the 1960s when nearly every female turtle arriving to nest in Tortuguero was taken for the export market for turtle soup. STC was established in 1959 specifically to study and protect Caribbean green turtles. Working closely with the Costa Rican government, STC helped establish Tortuguero National Park in 1970, a move that offered protection to the turtles and strictly limited the number of turtles that could be taken.

With the park established, development along the coast would never stretch much beyond the existing village, and the presence of STC researchers and park guards would discourage poaching. The park now includes over 19,000 hectares (46,900 acres) and protects 22 miles of nesting beach from the mouth of the Tortuguero River south to Parisimina. The park, and the Barra del Colorado Wildlife Refuge to the north, comprise the largest remaining adjoining tract of lowland wet tropical forest on Costa Rica’s Atlantic Coast.

How Important Is the National Park to Sea Turtles?

STC’s Involvement in Tortuguero and the National Park

Even with the establishment of the park, STC realized that the cultural demand for sea turtle meat and eggs would be harder to overcome. Trying not to interfere with local customs, STC instead began working with villagers to promote ecotourism as a more sustainable use of the sea turtles that come to Tortuguero each year. In 1971, STC began hiring Tortuguero villagers to walk the 22-mile stretch of black sand beach and count turtle tracks.

Gradually, local shops and hotels have sprouted offering villagers a steady source of income. Each year, tens of thousands of tourists come to Tortuguero to see the nesting sea turtles and the other natural treasures of the national park. After receiving certification through a STC training program, villagers are issued government permits authorizing them to guide tourists on nightly turtle watching excursions. Villagers take great pride in receiving a guide permit, and those that do are staunch defenders of Tortuguero’s turtles.

Other early initiatives focused on the importance of educating Costa Ricans and visitors alike about the various threats to sea turtle survival. With support from the Tinker Foundation, STC built an educational kiosk in the center of Tortuguero village that told the story of sea turtles. The kiosk still stands today, and STC has augmented its ability to educate by constructing the H. Clay Frick Natural History Museum and Visitor Center, which now reaches most visitors to Tortuguero.

STC’s sustainable development work with the Tortuguero community has demonstrated that live sea turtles on the beach have greater value for the villagers than dead turtles in the stewpot. Tourists pay considerable fees to watch sea turtles nest on Tortuguero Beach. Some 50,000 tourists visit Tortuguero annually to see nesting turtles and visit the tropical rainforests of Tortuguero National Park.

Vegetation: Most of the park is low alluvial floodplain (sea level to 20m) which extends far inland, and is occasionally interrupted by isolated volcanic hills of 100-300 m. An intricate network of blackwater canals and creeks dissect palm swamps and mixed rainforest throughout the region. The natural vegetation of the area progresses from the poorly-drained swamp forests in the lowlands near the coast to tropical wet and pre-montane forests further inland at higher elevations. Forest species composition gradually shifts from coastal scrub to huge expanses of Raphia palm swamp and mixed species along waterway margins, to tall multi-layered evergreen forests. Canopy trees may exceed 60 m in height with girths of 1-2 m, some with massive buttressing. Species diversity of both plants and animals is very high here — among the highest in Costa Rica.

Fauna: Abundant wildlife inhabits Tortuguero, including 57 species of amphibians, 111 species of reptiles, and 60 species of mammals. More than 300 species of birds live in Tortuguero for all or part of the year. Birdwatchers commonly see keel-billed toucans, slaty tailed trogons, Montezuma oropendulas and a variety of parrots. Birds common along the canals include green and great blue herons, egrets, belted kingfishers, anhingas, jacanas, sun grebes and several species of hawks and kites. Other animals commonly seen are fishing bats, three-toed sloths, iguanas, basilisk lizards, poison dart frogs, and howler, white-faced and spider monkeys. The tracks of river otters, collared peccaries, and Baird’s tapirs are often seen on the banks of rivers and canals. Caiman are commonly observed in the waterways, which also are home to gar-fish, manatees, crocodiles, crustaceans, and an occasional bullshark. Jaguars, ocelots, and kinkajous inhabit the park, but are rarely seen. 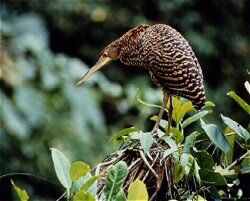