This year in our race to spread awareness, Tour De Turtles has 3 BIG competitors joining us all the way from Panama. Adult leatherbacks Calypso Blue V, Lady Aurelia, and Tortuga Turista join the race to shed some light on various issues affecting the sea turtle population.

TED in a trawl net

First we have Calypso Blue V who is swimming to raise awareness about the detrimental effects of commercial trawl fishing on sea turtles. More than 250,000 sea turtles are accidentally captured, harmed, or killed by fishermen in the U.S. alone each year. Trawling, which involves large nets being dragged behind one or more boats, poses such a serious threat due to its capacity to blindly catch all marine life in its path. While migrating through fishing areas, or feeding within those areas, sea turtles run the tremendous risk of being tangled within trawl nets, leading to possible injury or death. The implementation of Turtle Excluder Devices (TEDs) can reduce turtle captures by 90%, but are not currently required in non-shrimp trawl fisheries. With the incredible help from Atlantis, Paradise Island, we hope to expand the use of TEDs in all trawl fisheries and further regulate the industry.

Our next turtle, Lady Aurelia, is sponsored by the New England Cord Blood Bank to bring attention to the issues caused by invasive species. While sea turtles have many natural predators that help regulate the natural balance of the food chain, human development has brought rise to several unnatural predators that further endanger sea turtle populations. Trash left on the beach by humans attracts raccoons, stray dogs, or other non-native species in search for food; in turn, these animals may encounter a sea turtle nest or hatchlings and decide it a sufficient food source. Raccoons destroy tens of thousands of sea turtle eggs and hatchlings a year, making it one of the greatest causes of sea turtle mortality on Florida beaches. In Central America, dogs pose the greatest threat as many coastal villages allow them to run free where they can dig up several nests in one night, or even attack a nesting turtle. This problem can be solved with just some small steps us humans! 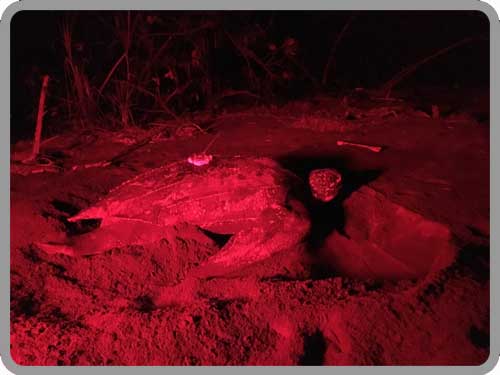 Tortuga Turista
is our last leatherback sea turtle from Panama. She, along with the tremendous support from her sponsors at the USF Patel College of Global Sustainability, is joining the race to speak up about sustainable tourism. Tourism is an ever-growing industry in our increasingly globalized world. While it brings forth countless economic and social benefits, it does not come without its many environmental concerns. Of greatest concern to us, is the impact of coastal tourism on this fragile ecosystem and its multitude of wildlife, like sea turtles. Nesting habitat degradation, an increase in waste, rise in boat strikes, and an increase in illumination on beaches—which discourage possible nesting turtles— are only some of the negative impacts seen with a rise in tourism. Through education and proper planning and management, the impact can be greatly reduced.

Join us in supporting one of these amazing turtles and their important cause! Visit www.tourdeturtles.org today to cheer for your favorite turtle!